byVern Faulkner
You are here:
< All Topics

There are many areas in the region that are at risk of flooding, and as a result, there are many properties in New Brunswick subject to flood-related loss.

Floods generally occur due to one of two reasons: significant rainfall or snow-melt that overwhelms streams and rivers (St. George area floods of December, 2010; Saint John River system in 2018), or storm surges (extreme high sea levels associated with tropical storms or hurricanes.) New Brunswick has experienced both in the last decade.

Note: None of the suggestions made here are mandated by the National Building Code.

The primary way to avoid property loss due to flooding is to avoid building in flood-prone areas. The alternative is to build or renovate to mitigate property loss due to flooding. Building code regulations enacted for flood-prone areas of U.S. states such as Georgia and Florida provide guidance on how to mitigate flood risk. The principle of building flood-resistant homes is to accept that floodwaters will, at some point, engulf the home and prepare for it by raising easily-damaged elements of the home above the expected 100-year flood level. The 100-year-flood level is often called the “Base Flood Elevation” or BFE.

Do: Build on either piers, concrete block wall, or concrete wall, such that any living space is at least 30 cm, if not 90 cm, above the Base Flood Elevation.

It is also important to note that floods do not pose risk just due to water. Water, especially moving water near rivers and other waterways, presents considerable force. A difference of just 30 cm of water pressing against a wall that is not supported on the other side creates lateral forces of 300 kilograms per square metre. The simplest way to reduce these pressures is to simply let the water pass through the wall, so the water level is the same on both sides. A common practice in flood-prone areas is to build “flood vents” into the wall. These are intentional openings equal to 1/150 the total interior floor area, set no more than 30 cm above the interior floor level. These allow water to enter (and leave) to reduce horizontal stresses. Combined with the practice of building with concrete, brick, or block below the BFE, this technique has been demonstrated to dramatically reduce flood-related losses.

However, it is also important to note that homes not subject to flooding can experience risk of water intrusion during significant rainfall or snowmelt. 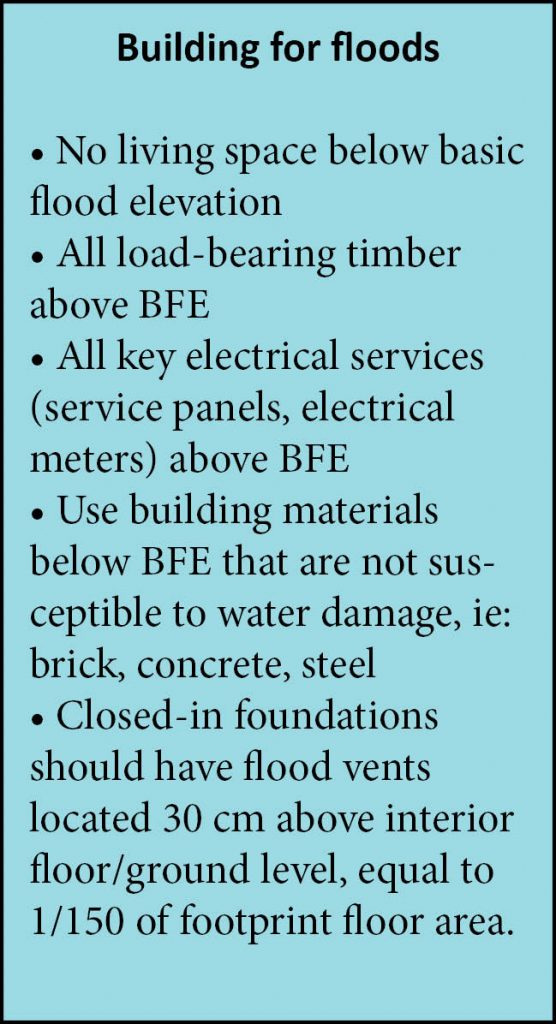 Avoid: building basements in homes where soil conditions are not conducive to draining excess water. This is also a function of where the home is located.

Do: consider slab-on-grade construction, or construction where the “basement” floor is actually at ground level, and fill is brought in to create a four-foot frost wall (or higher).

Do: consider installing a backflow prevention valve even if such isn’t mandated by code. Though plumbing codes require one for septic systems when bathrooms exist below grade, the use of a backflow valve in above-grade construction can prevent sewage backup when a septic system is totally overwhelmed by water.

Do: consider anchoring low-height decks to sonotubes or footings below the frost line. While decks greater than 60 cm in height, decks supporting a roof (and some decks attached to buildings) require these footings, low-height decks do not, and are commonly built on patio blocks. These can easily be moved, if not carried away by flood waters. The same goes for accessory buildings (sheds.)

The home is not the only area of concern during floods. Many outbuildings (sheds, etc.) are built on blocks or wood foundations, and, if floodwaters are moving quickly enough (freshets, for example) can be carried away. Consider anchoring sheds,

baby barns and other small outbuildings to concrete piers (sonotubes) or a strip footing of some nature.

Many residents of New Brunswick have cabins, or “camps” in remote parts of the province. Those who are planning to build camps near water should consider building on anchored piers (sonotubes sunk below ground level) to elevate the structure above expected flood levels. This not only raises the camp above the ground, reducing risk of contact with floodwater, but also creates under-cabin storage space for non-critical items. The exterior can be closed in with wooden walls (with flood vents) for extra security.

Next Building for wildfire
Table of Contents